In 1999 the Club promoted a project designed to acknowledge the lives and work of distinguished engineers whose connections with the region are not well known. It was decided that commemorative plaques placed on or near buildings associated with the selected candidates would help to 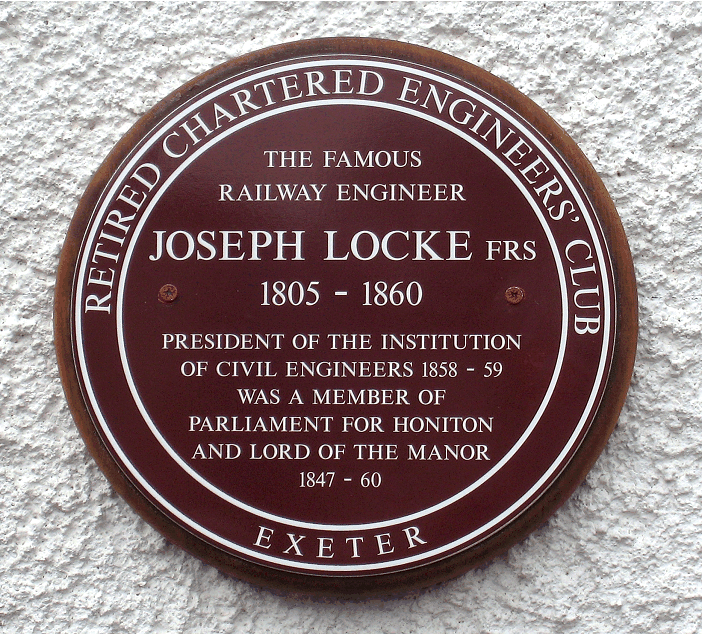 emphasise their local association as well as draw attention to the contribution they made to their chosen profession.
By fixing such plaques, it was hoped that not only would they publicise the role played by engineers in the technical development of the country but at the same time might help to regenerate interest in engineering as a career. It was not intended to duplicate any acknowledgement that may previously have been made by other organisations.
Before agreeing to the fixing of a plaque, the Club would fully research the life and engineering career of a candidate and only those considered worthy of selection would be approved.
In 2001 the first plaque was fixed in Exeter to commemorate James Green, Devon's first County Surveyor and this was followed the year after by a plaque to Sir Frank Whittle, the inventor of the jet engine, who lived in Chagford. Since then, plaques have been fixed for George Parker Bidder and James Meadows Rendel, both past presidents of the Institution of Civil Engineers who were born in Mortonhampstead and Whiddon Down respectively and in Lyme Regis for Percy Carlyle Gilchrist, co-inventor of a phosphorous removal process that revolutionised the manufacture of steel. Most recently, in March 2009 a plaque was unveiled in Honiton by Gwilymn Roberts a past President of the ICE, in memory of Joseph Locke the Railway Engineer and MP for Honiton.
Research into other potential candidates continues and it is hoped that not only will the project help to revitalise interest in professional engineering but will also serve to highlight the connection such eminent engineers have had with the area embraced by the Club's membership.

A DVD may be borrowed from the Club Secretary showing the unveiling of the Whittle Plaque. It contains the BBC Spotlight and ITV West Country news reports of the event and is preceded by a short film devoted to Sir Frank and his development of the jet engine. (Running time 40 minutes)

The origins, projects and activities of the Club are recorded in a short commemorative booklet and a copy of this can be read or downloaded from here.

THE SPIRIT OF ENGINEERING
Inspiration & Invention in the West Country

This is the title of a book compiled by members to commemorate the twentieth anniversary of the founding of the Club. Copies of this book have been donated to schools and libraries in the the local area to encourage young people to enter the engineering professions. Those wishing to obtain copies of the book should contact the club using the 'Contact Us' page of this website.
Andrew Ives, President of the Institution of Mechanical Engineers, in his Foreword to the book wrote,
"The individuals whose lives are described in the following chapters have one characteristic in common - they achieved their ambitions!
"Each one was driven by inspiration and dedication to reach a goal and it matters little that they were known as inventors, mathematicians or ironmongers - they all possessed the 'spirit of engineering that leads to success. The triumphs, frequently accomplished against all the odds, produced outstanding improvements in the quality of life for their own and following generations.
"The 19th and 20th centuries saw amazing developments in every field of technology and society continues to benefit from the application of technical expertise. Innovative communication systems, sophisticated medical equipment, new methods of power generation and the latest products from some of the new sciences such as nano-technology are all around us.
"At present, the central issues facing our world are concerned with the effects of pollution and the depletion of irreplaceable resources. Through research, scientists, physicists, chemists, geologists and many others will continue their vital contributions to resolve these problems, but engineering is the activity that makes the world habitable. It converts the results of this research into solid, practical, useable products and processes.
"This book has been compiled by Chartered Engineers who have spent a lifetime involved in worldwide projects. The achievements of our predecessors have been captured in the fervent hope that these will generate the enthusiasm of the 'spirit of engineering' in today's youth - the engineering pioneers of the future."

A copy of this book in five separate sections can be read or downloaded from the table below: